The recent launch of Jon Robins’ book, “Guilty Until Proven Innocent”, was covered by thejusticegap.com in an article which we summarise below.   The complete article can be found HERE.

‘I might be out of prison but I’m not free,’ Eddie Gilfoyle told a meeting in the House of Commons this week. The now 55-year old man was jailed for life in 1993 for the murder of his eight-and-a-half months’ pregnant wife and has been protesting his innocence for more than a quarter of a century.

Speaking at the launch of a new book by Justice Gap editor Jon Robins, Gilfoyle received a standing ovation for the first public speech he had given since he was released from prison in 2010. ‘I cannot have a normal life,’ Gilfoyle told the audience of MPs, lawyers, journalists and campaigners . ‘I do not know what a normal life is any more. Even if I cleared my name the damage done to me and my family is irreparable.’

The event was hosted by the new all-party parliamentary group on miscarriages of justice chaired by Barry Sheerman MP.  The APPG will meet regularly to highlight concerns about wrongful convictions. ‘Momentum is growing all the time,’ Sheerman said. ‘We have to get serious. We now need to launch a commission on miscarriages of justice so we are no longer a talking shop. We can take cases, call for evidence, write reports and organise better.’

Michael Mansfield QC opened the evening by reflecting on his 50 years as a barrister. ‘I reckon, probably more than most, I’m entitled to have observations about what has happened during my working lifetime,’ he said. ‘When I started things were going wrong then. There were problems with legal aid, problems with disclosure and representation. What I find shocking is that things have got worse.’

The human rights lawyer flagged up the recent Crown Prosecution Service review launched in the wake of a series of collapsed rape cases starting with the Liam Allan case before Christmas. The CPS revealed that problems with disclosure had been identified in 47 of 3,637 cases reviewed. ‘That is a lot,’ Mansfield said. ‘We know it is not restricted to sex offenders.’ 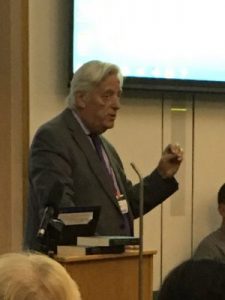 ‘a boring topic’, Mansfield said. ‘But it has been a key to so many miscarriages of justice. Justice, transparency and getting at the truth requires the ability to have access to the information’.

Liam Allan, who spent two years on bail after being charged with rape before his case collapsed, spoke of how he said goodbye to his mother ‘four or five times’ never knowing when he would see her again. ‘I don’t know if anyone has ever experienced saying goodbye to a parent. I walked through the police station door once and we thought I was going to be held on remand. I have two members of my family, my mum and my grandma. They are the people it hurt most.’

Mansfield, who wrote the introduction to Guilty Until Proven Innocent, paid tribute to the work of the Justice Gap editor. ‘Jon Robins has been tireless,’ he said. ‘It requires people such as Jon to alert others as to what’s going on in our own backyard.’

‘From my perspective I have seen extraordinary courage from people who fight the most extreme odds and extraordinary love from those who have supported them.’
Jon Robins

Matt Foot, the solicitor for Eddie Gilfoyle, spoke of the new regime for compensation for the victims of miscarriages which is currently being challenged in the Supreme Court in the case of another of his clients, Sam Hallam. As a result of the coalition government’s reforms in 2014, a person seeking compensation now has to prove their own innocence. ‘Last year nobody in this country received compensation for being a miscarriage of justice. That is extraordinary,’ said Foot. ‘What has been set up  is a system that Burma would be proud of.’

Foot also spoke of his concerns around the rising number of historical sexual abuse cases and said the process was at times akin to ‘fighting a case in the dark’ with many becoming ‘swept up in the process’.

Matt Foot introduced Eddie Gilfoyle. He recalled that the first time he met Gilfoyle’s family in 1996 when he, as a law student, watched Michael Mansfield in the Bridgewater Four appeal in 1997 and, as a law student, sat in the public gallery with his sister and brother-in-law who were both in attendance on Monday. ‘Then in 2006 I met Eddie in prison. I was prepared to argue with him and test him out but within five minutes it was bloody obvious Eddie was innocent. Everything I have seen since has only made that feeling stronger.’

‘Lady Justice should weep in shame…’

Eddie Gilfoyle accused the police of sitting on vital evidence for 18 years, his wife’s diaries. At the heart of the prosecution case at the original trial was the notion that Paula Gilfoyle had no history of depression and was excited about the imminent birth when she died in June 1992. The police had had his wife’s teenage diaries since 1994 (before his first appeal in 1995) and the Criminal Cases Review since 1998 (when they sent his case back for an appeal for the second time) but Gilfoyle’s solicitor Matt Foot only obtained them in 2010. The diaries record a suicide attempt by Paula as well as a relationship with her first boyfriend who murdered and raped a woman after having sex with her in a park. The relationship continued after his conviction.

In a dignified but angry speech, Gilfoyle attacked the CCRC, which rejected a second application in 2016 and he said ‘had become part of the problem’; and the Court of Appeal which he said was ‘there to uphold the jury’s verdict at all costs’.

‘It is there to protect the establishment which they are part of,’ Gilfoyle continued. ‘They can’t be independent. What chance has somebody like me got of ever overturning my conviction? Because of my nightmare experience of the justice system, I now know our justice system is designed to prevent the corruption and dishonesty in the system ever coming to the public’s attention, and to protect their own. It is people like me who pay the price for their dishonesty because people like me don’t matter. All that matters to them is that the public believe our justice system works.’

He said that for 26 years he had felt like he had ‘been walking down a corridor with doors on either side … As I get close, the doors slam shut in my face. I get to the end of the corridor and I have nowhere to go’. he said.

‘I came here to show my gratitude to Jon and to tell you I am an innocent man. There was no crime committed in my case. The justice system has completely failed me. They refuse to right this wrong. The statue of the lady justice should weep in shame … The statute of Lady Justice is supposed to represent our justice system. Today Lady Justice is protecting the whole rotten lot of them.’
Eddie Gilfoyle

Following last month’s BBC Panorama report into the CCRC  which featured the Gilfoyle case, Matt Foot said that a another application would be going back to the commission ‘in the near future on the issue of antenatal depression and suicide’.

Science is not a democracy

Dr Waney Squier told the audience that there were ‘probably well over 200 families damaged and destroyed’ by incorrect diagnoses of shaken baby syndrome every year. Dr Squier was struck off by the General Medical Council, and subsequently reinstated but remains barred from giving evidence in court.

She said that the controversial ‘diagnosis’ was based on an assumption of a triad of symptoms. ‘This assumption has never been supported by any scientific evidence,’ she said.’ But science is not a democracy and a hypothesis cannot be accepted as correct just because people believe it.’ She criticised the family courts for ‘draconian decisions to remove babies from their parents’.

Dr Squier argued that the problem with these courts appear was two-fold. ‘Firstly, secrecy so we cannot see and hear what is being used as evidence; secondly, the routine use of single joint experts. As the single expert his opinion isn’t challenged. This is wrong and against the spirit of our adversarial system. Any opinion should surely be strengthened by intelligent opposition.’

‘How much longer can we tolerate courts making decisions of such major importance, destroying hundreds of families every year, on the basis of unsubstantiated consensus opinion rather than science?’
Dr Waney Squier

The mathematician and statistician Professor Norman Fenton spoke about his concerns over the safety of the conviction of Ben Geen. Some 18 patients suffered unexplained respiratory arrests while the staff nurse Ben Geen was on duty at Horton Green General Hospital between December 2003 and February 2004, including two who died.

The prosecution argued that the sequence of incidents amounted to an ‘unusual pattern’ of sudden and unexplained respiratory arrest and consequently Geen had to be the killer. He has always protested his innocence.

Prof Fenton argued that situations which appear to be extremely unlikely coincidence were often not as unlikely as most people thought. ‘Coincidences which appear almost impossible often actually have a very high probability of occurring,’ he said.

‘If you observe a person rolling a six-sided die five times and getting a six each time you would think he was cheating – the probability of that happening by chance is one in nearly 8,000,’ Prof Fenton said. ‘But, if there are 20,000 people rolling a die five times then it would be extremely unlikely that less than two of them would roll five sixes.’

He argued that the cluster of events observed in the Geen case (18 in a two-month period) was not at all unusual. ‘Given the number of hospitals in the UK, in any four-year period it is almost certain that there will be several instances of exactly this kind of “abnormally high” sequence of respiratory events,’ he said. ‘It is actually quite likely that, purely by chance, in at least one such sequence there will be the same nurse present at each event.’

The decision by the coroner at the Birmingham bombings inquest to exclude from scrutiny the very matters that might have allowed the victims’ families some degree of closure – a decision that also denied justice to Paddy Hill and the other unwitting victims of the atrocity – rendered that exercise effectively pointless and, depending on […]

For miscarriage of justice victims looking to overturn their wrongful convictions, one of the most significant challenges they encounter is the refusal of police and Crown to allow access to crucial evidence that could fatally undermine the case against them. From The Guardian online yesterday (10 July), we reproduce an interesting article that highlights this […]

The MOJO Aftercare and Reintegration Team are pleased to report the successful, long-awaited launch of our MOJO Community Project. The MOJO Community is an extension of our client-led reintegration programme which aims to bring clients together to seek to mitigate the consequences of wrongful imprisonment and to offer an alternative to commonly encountered feelings of […]